Interview with the glorious Ryan from Oak cycles for a university assignment (I was asked to write it for the Guardian’s now defunct ‘A working life‘ section). It’s a bit cheesy but he’s such a babe I don’t care. Find out more about Oak here.

Ryan McCaig loves bicycles. He thinks they are beautiful, personal and intensely practical. It’s brilliant to hear a man, wearing overalls and brandishing a blowtorch, talk about his passion with equal measures of frankness and romance.

“You can make a chair and sit on it. You can make good art, put it in a gallery and talk about it. But when you make a bicycle, you can take it and ride it around the world, or carry heavy loads, or just ride it to work every day. It’s got such potential.”

McCaig, 30, builds custom bicycle frames in a tiny workshop in Hackney Wick. He’s originally from Canada but has lived in London for six years. When I arrive he is patiently examining a stainless steel bike frame held in a homemade clamp that can move in every direction. The frame pirouettes at the lightest touch.

He calls the operation Oak Cycles. On the shelf there’s a queue of cardboard boxes filled with steel tubes, each with a name scrawled on it representing someone waiting for a bicycle.

How did it all begin?

“I was going to cycle around the world but I couldn’t find anyone that was making the bike that I wanted for the trip. So I set about reading a bunch of books and buying tools. And I made a bike frame. That was five years ago now.”

How was the trip? “We didn’t make it the whole way around the world – it got really cold in Turkey so we turned right and headed for Africa instead.”

I’m unsure how a man who cycled to Africa can spend his days in this small room. “I once went hiking with a guy who told me ‘You need something. You can’t just be an aloof, hitchhiking, travelling bum the rest of your life.’ That stuck with me.”

McCaig seems far from an aloof bum. His skill set is ever expanding. He describes joining the metal tubes together by brazing – a process that looks like welding but with a softer glow. “I heat the two parent materials so they are able to accept the filler material brass. A molecular bond happens which is very strong.” 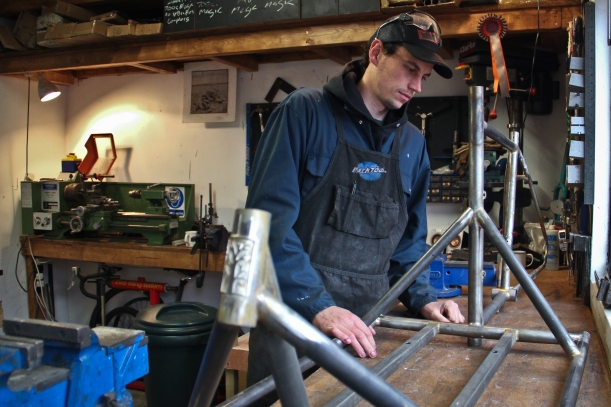 Putting the pieces together is only a small part of the job. McCaig’s customers are, generally, demanding middle-aged men with bachelor lifestyles. They’re men who have loved bikes their whole lives, but never quite found one that fits perfectly. McCaig likens it to when a man discovers, after years of buying their suits from M&S, just how good Savile Row tailoring feels.

But despite the fact that most of his customers already have ten or more bicycles, even the most Lycra-clad patron doesn’t share McCaig’s technical vocabulary.

“People ask for their bike to be ‘comfortable’ and ‘durable’. I have to turn those words into a functional form with angles, geometry, tube specifications, diameters and wall thicknesses. Those technical fabrication aspects dictate how the bike rides. But people just know they want a bike to be, you know, red.”

There can’t be many people making frames in this way, on this small a scale? “There was something like 50 frame builders in London in the 1950s, but when I was looking to learn there was just one.”

“So I taught myself. I made 10 bikes for 10 friends at the cost of materials. That was 100 hours per bicycle – 1000 hours total. I decided; that would be my own apprenticeship.”

A lot of his time is spent looking at steel. From the first consultation with the customer to the final product, the process takes a year. I ask if he’s ever sad to see the bikes leave.

“Artists will talk about how if you spend time with an inanimate object you grow attached to it and it’s hard to let it go. I’m not saying I’m an artist of course. But that stainless steel bike I was looking at when you came in, that has another 16 hours of work in it and I’ve already put 100 hours into it. If you’ve ever stared at one piece of material for 100 hours… there’s definitely an attachment.”

The commitment of a craftsman like McCaig seems baffling to the layman. He has always tinkered with objects, concocting structures in his uncle’s Ottawa garage as a teenager.

“I say this all happened in the last few years, but I first made a bike when I was 16. It was a penny-farthing. It was awesome; a bunch of old BMX bikes that I stuck together. I only had an angle grinder and a TIG welder. It was a bit of a disaster, but I just went for it.”

Things are no longer disastrous. Every customer so far, he says, has been a happy one. His work is, as we speak, conquering roads all over the world. Next month there will be four Oak bikes riding around South America simultaneously.

“We’re going to try and figure out a way they can meet up and take a photo. Touring bikes is what I love to do, so it’s pretty cool.”

He may not have made it around the globe himself, but his work most certainly has.