courtesy of LOGAN AND SAUL.

Bidniz cards were also part of the deal… Call me, K?

My homeland has received some uncharacteristic attention of late – everyone I meet under the age of 18 asks me why Derry-Londonderry has so many syllables (thanks Radio 1) and/or if Obama and my Mum are now bezzies after the G8. But by far the newest and most popular subject broached by those who inquire about the land beyond the grey Irish Sea is Game of Thrones. Whether they be Lannister, Greyjoy or Stark, Game of  Thrones fans love to ask me whether I’ve been to any of the places in which the HBO dollar-spunking series was shot. And I greatly enjoy telling people that I have been to many of the beautiful places onto which dragons and boobies have been rendered. I also enjoy shouting “I KNOW THAT HILL” in the midst of sometimes tense political moments during the show, ruining the experience for everyone in the room. They are some very nice hills.

The Northern Irish tourist board has had publicity-hungry babies over the Isle’s new found popularity. Twitter blazed during a BAFTA acceptance speech in which the residents of Belfast were thanked for their hospitality and now bus companies are cobbling together tours of the country that highlight landmarks from the series. In the Titanic building there is currently an exhibition of some of the props used during the show, including a chance to sit on the Iron Throne. You heard – there are fictional attractions inside a building built to commemorate a real life event that was made more famous by a fictional feature film. When I heard of this opportunity I actually cursed the fact that I live in (the brilliant) London. That’s how much I want to sit on the Iron Throne. And my desire to do so has resulted in me reflecting on what my cultural priorities truly are.

I’m currently travelling around the UK to pretty much every nook and fanny you can imagine. It’s all for my new job and I’m undertaking these trips with only my Spotify account for company. I have a car, a sat nav, and a relentless desire to explore the country’s pop culture sights. When in Edinburgh I completely ignored the beautiful architecture that surrounded me and instead took photos at JK Rowling’s old haunt, the Elephant House, and streets where Trainspotting was filmed. In Manchester I pretended to be Morrissey outside the Salford Lad’s Club and waved at Marc Riley through the window at MediaCity. Aside from a brief stop at the Angel of the North (ACTUAL REAL-PEOPLE LANDMARK) I’ve been uninterested in anything that doesn’t appear in a cult film or my childhood memories.

And the more I think about my gravitation towards ludicrous and altogether fictional hotspots, the more I realise that my life has played host to a succession of these ridiculous trips. I’ve been to the shop where Black Books was filmed in Bloomsbury, skipped past the house used in the King’s Speech, nearly exploded with joy when I was an audience member inside the now empty Television Studios, and contemplated my existence at Postman’s Park – a piece of green featured in Closer. I’ve gazed at a bridge in Dublin featured in the film ‘Inside I’m Dancing’ (good, but by no means a favourite). In fact I’ve earned my living on and off for the last two years by showing people locations from the Harry Potter films and have even visited the sets out in Watford. Since I moved to London three years ago I’ve had a visit to Tufnell Park, home of the fictional ‘Meteor Street’ from the sitcom Spaced, on my list of things to do. Douglas Adam’s grave, home of 90s debauchery The Groucho Club, and the Beatles Zebra Crossing are all boxes waiting patiently to be ticked.

So, it appears if left to my own devices I will exclusively seek out fictional places to visit. I recently had the terrifying realisation that if I ever make it to New York I would rather go to the pub that MacLaren’s in How I Met Your Mother is based on than to the Empire State Building. I don’t even really like How I Met Your Mother. I think it is incredibly average. In Manchester I stopped myself from going to the original site of Coronation Street because I’ve never watched it in my life. But TV history seems so much more relevant to my existence than actual history. When I walk down Whitehall I tend to envision myself as James Bond and I always consider my alternative Sliding Doors universe whenever I board a tube train. My immersion in film and musical culture is so absolute that a visit to Wordsworth’s old gaff in the brilliantly named Cumbrian town of Cockermouth is actually my most high-brow venture to date.

After some consideration I feel that this is somehow an extension of wearing a band t-shirt – an attempt to convey how fantastically niche your interests are without having to come out with douchey sentences that may be greeted by blank faces. A quick snap and a Facebook upload later I’m getting my ‘like’ kicks whilst still safe in the knowledge it’s only other obsessives like myself that know the significance of the backdrop I’ve draped myself against. And in an era where the whole world can come to you via print-screening street view, there’s something incredibly novel about getting a train to a place in order to stand where someone else once stood. It’s also, perhaps, about trying to will the place, TV show, character or episode into existence. If I stand beside the book shop long enough and wish for it hard enough then maybe Bernard Black will invite me in. If I don a quiff and strike a pose maybe I’ll magically be transported back in time to when The Smiths were fresh and new. People may say they feel ‘a connection’ to characters from stories that are factual, but I don’t quite see how it’s possible to empathise with Marie Antoinette when the time she lived in had a completely different set of values and structures. Game of Thrones may be set in Westeros, but its morality is fully cemented in 21st century beliefs. So why shouldn’t I be more enthralled by the fact that V for Vendetta was filmed outside Westminster than the fact that Guy Fawkes was hung drawn and quartered there? In the end, Natalie Portman has probably had a considerably larger influence on my life than Guido. Welcome to reality, ladies and gents.

– If you have any suggestions as to pop culture sights which I could visit, please LEMME KNOW

Girls Names have a new track. The album is being finished off but they’ve been kind enough to impart seven minutes of wonder upon us mere mortals. Click the scrummy artwork for their soundcloud or listen below.

Remember I told you that you wouldn’t be able to get your hands on the Death Rattle cover of Fleetwood Mac? I lied. By popular demand it’s available to stream on soundcloud for a limited time. The mail-out which informed me of this fact also boasted that people from Esquire and Grazia were all over this. You can take that as a good or a bad thing.

Birthday Sex treated us to a new tune on Friday. Imagine if the song ‘From Paris to Berlin’ was actually amazing. I feel that Harriet and Tom will not be pleased with this ‘comparison’, but I reckon there’s something in it. But I’d like to emphasise again that this is a good song and really in no way akin to Infernal‘s 2006 smash. In summary, no one should listen to me. But do listen to Birthday Sex.

p.s If you, like me, are completely in love with the Birthday Sex artwork, then please check out graphic designer BROOKE OLSEN. She will soon be making me some business cards and I’m positively chuffed.

I had a lot of fun at LCM but, predictably, my favourite part of the weekend was music related. Mr Start’s show used a cover of Fleetwood Mac’s ‘The Chain’ by the incredibly named Death Rattle. The track is due to feature on the duos debut EP which will be out in October (edit – since a lot of people seem to be coming across this post via searching for this track I thought you may like to know that the band say it’s not available anywhere until the EP release). In the meantime you can listen to some stuff by clicking on the photo above. I’m particularly enjoying ‘The Dig’.

Fashion music usually sucks. This does not suck.

DEATH RATTLE ARE PLAYING THE SEBRIGHT ARMS ON JULY 14TH. I LIVE NEAR THERE. IF YOU’RE NICE AND WANT A GIG BUDDY FOR THIS SHOW THEN SEND ME AN EMAIL.

ANOTHER LINK FOR DR

p.s You can read all my posts from my weekend at LCM right here.

I got my photos back from Berlin. Here are some of them.

The second snap shows the ‘abandoned’ theme park that was featured in the film Hanna (the security guard’s least favourite film ever).

p.s My interview with Mr Start and photos of his SS13 show can be found here. 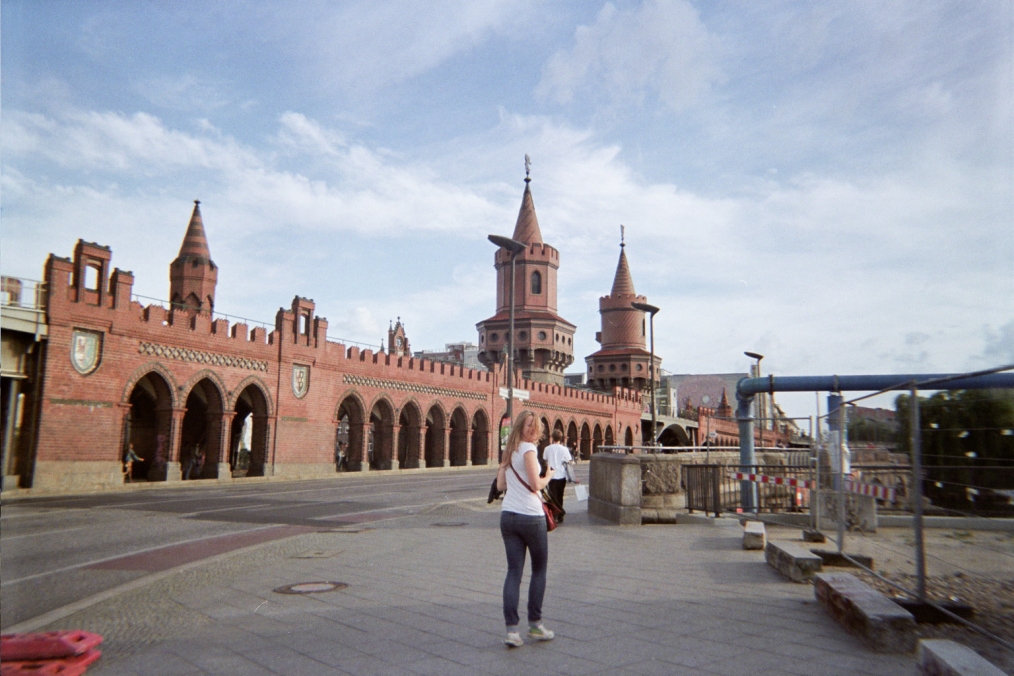 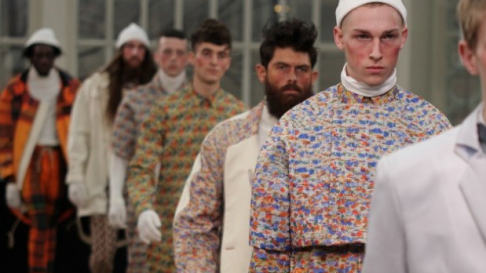 Hey duderettes, I’m going to spend the next few days writing about some luscious men in luscious menswear. You can keep your peepers peeled for a byline at the Planet Notion LCM portal HERE. I’ll be tweeting about who I’m set to interview so if you wanna help me out by doing my job for me and sending me questions then hit up @_afaceforradio.