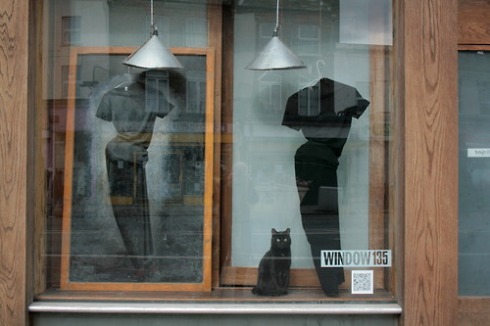 In September I will be going back to school to get an MA in Magazine Journalism at City University London. For my application I had to write about someone in my area. I wrote a tiny 150 words on Tim and Meena, my neighbours.

– Tim and Meena live in a house that was once a greengrocers. In 2004 they came up with a way to ensure themselves some privacy and enliven the dreariness of New Cross Road by turning their full-size shop window into a gallery space. But after spending some time with this inherently creative duo (their degrees span Fine Art, Fashion Design and Architecture), it’s clear they have a touch of contempt for the traditional gallery format. “We went to the Photographers Gallery a while ago and there was a kid translating everything for the ‘old people’,” laughs Meena.

Things are certainly different with Window 135. The couple love how their space is both accessible and confusing. Nothing about the project is signposted; it’s left to the passers-by to come to their own conclusions about the work and why it’s there. Tim often runs up to the top deck of the bus to see how the display looks to passing commuters. People sometimes try to open their front door, thinking they might be able to look around the nonexistent exhibition.

Currently the window is home to work by the shoe and jewellery designer Emily Botterman. Necklaces are draped from coat hangers – but they won’t be there for long. An enthusiastic Tim admits “after a week or so you become ready for something new.” Do they have a favourite window from over the years? Meena tells of placing “photographs of musicians’ heads in jam jars.” They smile. ”It’s about play.”